From their handmade jewelry and silver objects, to their textural designs and exclusive diamond cut, keep reading as we share the 5 reasons we love Buccellati jewelry. As luxury jewelry aficionados, we love the artistry, history and craftsmanship that goes into fine jewelry creations. And with 100 years of fine Italian craftsmanship, there is plenty to love about Buccellati. From their handmade jewelry and silver objects, to their textural designs and exclusive diamond cut, keep reading as we share the 5 reasons we love Buccellati jewelry.

Buccellati has remained a family owned luxury jeweler for four generations, with each generation expanding the Milan based jeweler’s presence, passing their techniques and passion from one generation to the next.

In 1919, at the age of 28, Mario Buccellati opened his opened his first boutique in Italy, making circlets, necklaces and cocktail rings for members of high society. Mario quickly captured every attendee’s attention during Madrid’s 1920 Exposition when a woman asked for a discount on an expensive compact. Enraged, Mario tossed the compact out a window shouting, “I am not a tradesman!”. The following day, hundreds of people came to his booth, curious about the explosive jeweler and his wearers, buying out all of his products.

It was not long before Mario became known as “the Prince of Goldsmiths” and in 1954 was the first Italian jewelry designer to open a boutique on 5th avenue in New York City. Mario’s son Gianmaria joined him in 1965 when he was just 14 years old. Gianmaria’s designs achieved global recognition and his passion for diamonds eventually led him to founding the Italian Gemological Institute of which he was the president for 25 years. Following his father’s passing, Gianmaria took over management of Buccellati alongside his brothers. He later opened a store in Paris on the iconic place Vendome, taking his place next to the world’s top designer jewelry brands.

Gianmaria’s son Andrea joined Buccellati in 1978 and the two worked to further expand Buccellati, growing the brand to 19 boutiques across the world today. In 2014, Andrea’s daughter Lucrezia came on as Buccellati’s first female designer. Lucrezia began designing for a younger generation while maintaining Buccellati’s tradition of finely handcrafted jewelry.

Inspired by the Renaissance era and rich fabrics, Mario Buccellati experimented with antique-style tools and old techniques, giving his jewelry a distinctive and textured style. Mario ensured that no gold went untouched in his handcrafted creations, with engravings on even the smallest bits of gold. Buccellati jewelry is crafted to look and feel like luxurious fabrics such as silk, lace and tulle. To achieve these textures, Buccellati uses an array of classic techniques:

As Renaissance era art and architecture are one of Buccellati’s greatest inspirations, a deep appreciation of art has remained at Buccellati’s core. Throughout their history, Buccellati has collaborated with artists and held shows honoring their jewelry and silverwork alongside the art that inspires them.

Most notably was Buccellati’s Timeless Blue collection which consisted of five unique pieces inspired by impressionist and post-impressionist paintings. Unveiled at their flagship store in Manhattan in 2015, Buccellati showcased each of the five pieces of jewelry beside the painting they are inspired creating an unforgettable art gallery. Mikhail Larionov’s painting of The Spider’s Web was translated into a ring where a diamond adorned spider sits atop a golden web. Winslow Homer’s painting Light Blue Sea at Prout was transformed into a bracelet, reproducing the painting’s smooth waves and foam through hundreds of round diamonds and crafted with the honeycomb and tulle techniques.

Buccellati’s most surprising collaboration was in 2018 during Paris’ Haute Couture Week where the jewelry house partnered with virtual fashion influencer Noonoouri. Noonoouri is a CGI fashionista with a delicate, doll-like face and over 300,000 Instagram followers. She has collaborated with other luxury brands such as Dior, Versace, Marc Jacobs and shows no signs of slowing down. For Paris Haute Couture Week, Buccellati produced a video where Noonoouri wore a flowing blue gown and Buccellati’s Camelia pendant with the matching earrings, featuring an intricate honeycomb pattern.

Where to buy affordable Buccellati jewelry?

Looking for affordable Buccellati jewelry of your own? Gemma by WP Diamonds is your one-stop-shop for pre-owned Buccellati jewelry as well as other beloved luxury jewelry and watch brands, such as Bulgari, Van Cleef & Arpels and Harry Winston. All of our jewelry is authenticated by our team of industry experts and our customer service team is always ready to answer any of your questions. With up to 80% off retail, easy monthly payment options with our partner Affirm, a dedicated customer service team, free US shipping and 14-day return policy, shopping for Buccellati jewelry has never been more enjoyable. 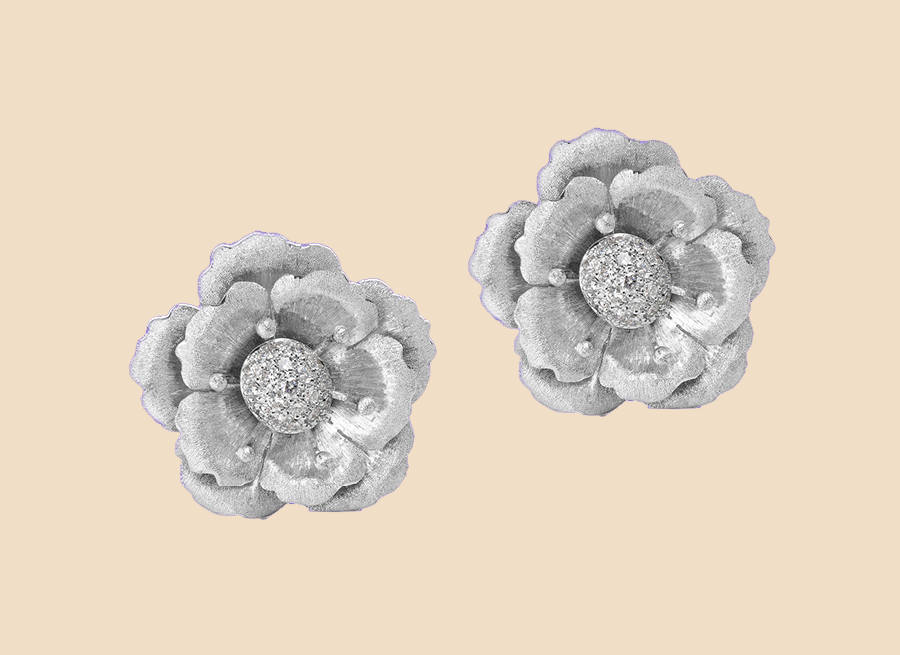