Where to Buy an Engagement Ring?

As engagement season—the time between Thanksgiving and Valentine’s Day when 40 percent of all proposals happen—swings into high gear, we tell you how to find an engagement ring for the best price. Where to Buy an Engagement Ring?

Engagement season—the time between Thanksgiving and Valentine’s Day when 40 percent of all proposals happen—is already swinging into high gear. On Christmas, more people will pop the question then on any other day of the year, followed by Valentine’s Day, Christmas Eve, New Year’s, and New Year’s Eve. Billions of dollars of rings will be slipped onto hundreds of thousands of fingers. So, to celebrate this season of romance and ring buying, we decided to find out how the tradition got started, where to buy an engagement ring, and how much to spend.

Where to buy an engagement ring for the best price

Once you’ve decided to pop the question, you’re probably wondering where to buy an engagement ring.  Whether you’re looking for a diamond solitaire from Tiffany & Co., a double-halo dazzler, or a diamond-set band that will double as your wedding ring, you’ll find it here at Gemma by WP Diamonds. We offer a large selection of authenticated, accurately described, pre-owned engagement rings that range from the completely classic to the utterly unconventional—all at exceptional prices. With free U.S. shipping, affordable payment plans through our partner Affirm as well as up to 80 percent off retail prices, Gemma is your one-stop shop for engagement rings.

How to afford an engagement ring

One of the easiest ways to finance the jewelry you want is by selling the jewelry you don’t want. You may have a ring from a previous relationship, inherited pieces that are not your size or style, or other jewelry that’s just gathering dust in a drawer—and running up your insurance bill. That’s where we come in: As specialist online diamond, jewelry, and luxury watch buyers, we make it easier to afford the engagement ring of your dreams. Sell your luxury designer jewelry and watches for cash or store credit, with a 10 percent increase when you opt for store credit. You can feel confident in our trust guarantee and hundreds of positive customer reviews.

Sell Online: We will provide you with a free, fully insured, overnight, and trackable shipping label to send your jewelry to our office. When your jewelry arrives, it will be opened on camera and promptly evaluated by our luxury jewelry team. Your client manager will contact you with our final offer and explanation of how we came to that price. You can accept payment by wire or check. If you refuse our offer, you can always request to have your jewelry returned to you the next business day for free.

Sell In Person: We provide appointments at our secure and comfortable offices in New York, the UK, and Hong Kong every weekday from 9 a.m. to 5 p.m. Appointments are typically 30 minutes long, during which you will meet with a member of our evaluation team who will assess and price your jewelry. You are never obligated to sell and your appointment will always be free.

When you sell to the experts at WP Diamonds, you can rest assured that you are getting the highest offers. For example: For engagement rings from elite names like Tiffany, Cartier, and Harry Winston, many jewelry buyers will offer only the value of the stone and try to pay only for the scrap value of the setting, whereas we value the integrity of an authentic piece. Click our link to see how much you can make when you sell your engagement ring.

How the tradition of diamond engagement rings started

While the custom of giving a ring as a symbol of betrothal has been around for centuries and the custom of putting a diamond in that ring was documented as far back as the 1400s, the diamond engagement ring industry didn’t really get off the ground until the late 1940s. That’s when N.W. Ayer & Son, one of the era’s pre-eminent Madison Avenue agencies, came up with the “A Diamond Is Forever” campaign for client De Beers.

At the time, De Beers Consolidated Mines was a cartel that controlled most of the world’s diamond supply. Sales had suffered during the Depression and N.W. Ayer had been hired to create demand for De Beers' goods. When a market survey revealed that Americans thought of diamonds as the exclusive purview of the ultra-wealthy, copywriter Frances Gerety came up with the strategy of creating a situation where every couple felt compelled to acquire a diamond engagement ring. From 1947 onward, advertisements with her tagline, “A Diamond Is Forever,” were run relentlessly in high-circulation magazines like Life and Look.

As the demand for diamonds rose, the ads continued. “How to Buy a Diamond” began appearing in the corner of each one, advising consumers to look for cut, color, and clarity—a strategy intended to sell De Beers’ smaller stones. At the same time, Gerety’s co-worker, a publicist named Dorothy Dignam, began lending diamond jewelry to stars for the Academy Awards and other well-photographed events. Together, the two women’s efforts  gave rise to an entire engagement ring industry—although neither Gerety nor Dignam themselves ever married.

How much engaged couples spend on a ring

In the 1980s, De Beers also funded an advertising campaign to convince Americans that an engagement ring should be two months’ salary. That was less successful.

A New York Times-commissioned poll revealed that most Americans spend about two weeks’ salary on a ring, a percentage of income that remains remarkably consistent across age and income levels. The exception: people with incomes under $23,000, who are more likely to spend two months’ salary.

How engagement traditions are evolving

With 75 percent of soon-to-be-married couples still investing in engagement rings, it’s safe to say that the custom isn’t going away any time soon. What is changing—a lot—is the dominance of traditional rings in traditional settings and the traditional ways of buying them. Not only are engagement rings becoming more popular in alternative settings such as rose gold, white gold, yellow gold, and platinum, but there has been a rise in popularity for two-stone engagement rings too.

Another evolution: the rise of the secondary market. Couples concerned about sustainability may opt for a pre-owned ring as a way to lessen environmental impact. Equally, they may want to make their jewelry-buying budget go further and get more dazzle for their dollar. 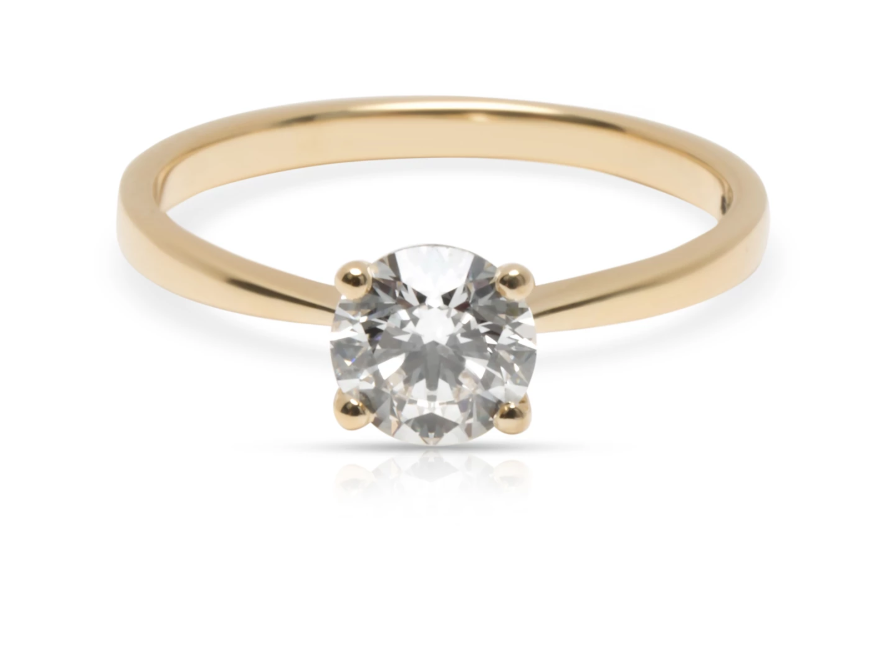