From delicate flowers to playful animals and billowing ballerinas, Van Cleef & Arpels has long been celebrated for their masterfully crafted and fantastical jewelry. Van Cleef & Arpels was born as a union between two lovers, Estelle Arpels, the daughter of a dealer in precious stones, and Alfred Van Cleef, the son of a stone cutter. The couple married in 1895 and were driven by their pioneering spirit and passion for precious stones to create the Van Cleef jewelry brand.

The Maison was founded in 1906 between Alfred and Estelle’s brother Charles (later joined by Estelle’s other brothers). The two opened a boutique in Place Vendome in Paris, directly across from the Ritz Hotel. This location attracted many European aristocrats who fell in love with Van Cleef & Arpels’ creations, thereby helping to spread the Maison’s timeless pieces with the world. Van Cleef & Arpels has continuously employed a wide array of precious stones in their jewelry, including diamonds, sapphires and carnelian.

Van Cleef & Arpels has a track record of creating exquisite jewelry for royalty, celebrities and the lavishly wealthy. The Maison’s jewelry has adorned the likes of Queen Sophia of Spain,  Grace Kelly and Elizabeth Taylor as well  as today’s celebrities such as Mariah Carey and Reese Witherspoon.

Van Cleef & Arpels’ signature collection is the Alhambra, a four-leaf clover with a scalloped outline that represents luck, love and health. The clover has been adorned with a wide assortment of precious stones, with mother-of-pearl reigning supreme. This collection was created in 1968 and was inspired by quatrefoil motifs found on the Moorish tiles of the Alhambra Palace in Granada. This coveted collection spans rings, earrings, necklaces, bracelets and watches.

Van Cleef & Arpels is well known for their Mystery Set technique, whereby gemstones are set in jewelry in such a manner that no prongs are visible. This technique was established by the Maison in 1933 and is still in practice today. While other high end jewelry brands have also attempted this gemstone setting technique, none have equalled Van Cleef & Arpels’ skill.

This technique can only be executed by a master jeweler who must have perfectly color matched gemstones which have been meticulously cut so that they seamlessly fit beside each other. According to Van Cleef, a single clip can take over 300 hours, so it comes as no surprise that only a few Mystery Set pieces are made a year.

In a feat of unbound creativity and technical achievement, Van Cleef & Arpels has also established themselves as the masters of transformable jewelry. One of the Maison’s first transformable pieces is the Passe-Partout necklace which is comprised of a flexible gold snake chain and two flower clips. The wearer can manipulate the piece to be worn as a necklace, choker, bracelet or broach. The Zip necklace is another of Van Cleef & Arpels coveted transformable pieces, which is a functional zipper adorned in gemstones that can be worn as a necklace or bracelet when fully zipped.

Explore some of our favorite Van Cleef & Arpels jewelry.

Buy Van Cleef & Arpels jewelry for the best price when you shop at Gemma by WP Diamonds. We carry a wide array of pre-owned designer jewelry and luxury watches from all of your favorite brands up to 80% off retail prices. Purchasing your favorite Van Cleef & Arpels jewelry easier than ever with affordable payment plans through our partner Affirm and free US shipping. Each piece has been authenticated by our team of experts allowing you to buy Van Cleef jewelry for less. 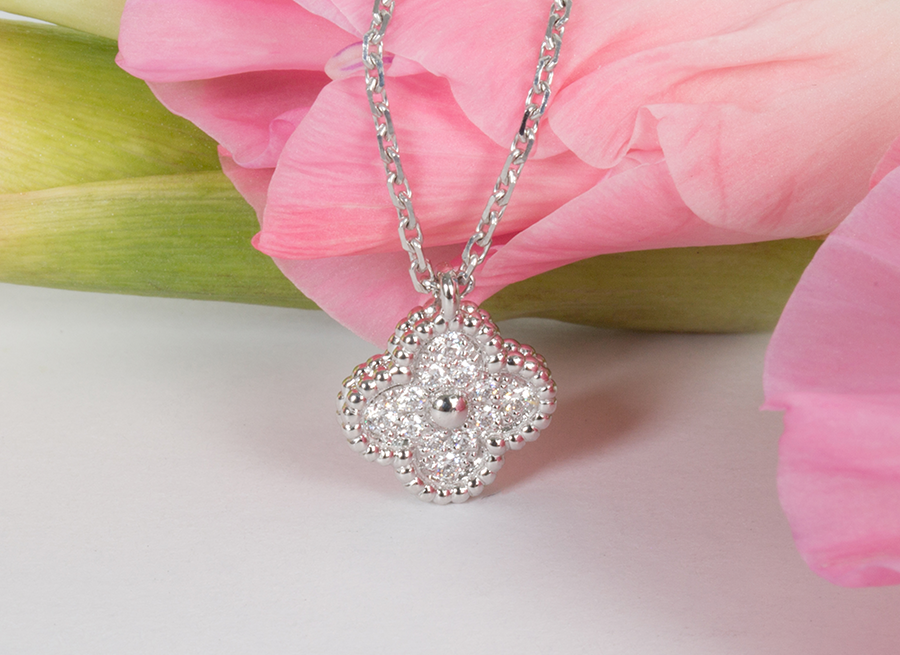